Both the building and sanctuary of North Hills Church were designed by architects Straub and Van Dine (protégés of Eero Saarinen) and built in 1971, shortly after the congregation was formed.  Two subsequent building additions were added in 1980 and 2008, respectively.

The Sanctuary is built on the former farm grounds of the Caswells, one of Troy’s founding families.  In fact, the magnificent oak trees and lilacs on the campus remain from the original farmstead, and the church building is built on the actual site of the original Georgian farmhouse.  The Caswell farmhouse was relocated to the Troy Historical Museum (Wattles and 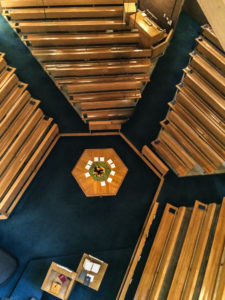 Livernois) when church construction began.  Per the family’s wishes, the Caswell family Bible remains at the church.  It is located in a glass case in the lobby foyer.

The North Hills Sanctuary and building has won several liturgical and architectural awards.  The center of the worship space is the hexagon communion table around which the congregation gathers in four sloping bays.  The mid-century aesthetic is apparent both in the simple use of line and also in the limited use of material: brick, oak and copper.  Contrasting with the communal and intimate feel of the space are soaring walls and clerestory windows which flood the space with natural light, and illuminate dramatic angles of every description except right.

In 2002, North Hills Church commissioned Chris Stoffel Overvoorde, Professor of Art Emeritus of Calvin College, to complete a series of paraments (fabric pulpit banners) for the church year.  Over the next several years, the commission was completed–with much of the appliqued handwork done by Mrs. Jean Engle, Pastor Engle’s mother.  In 2018, the church’s carpet was removed and its original aggregate concrete floor was restored resulting in a resonant acoustical space that enhances the congregation’s worship and singing. 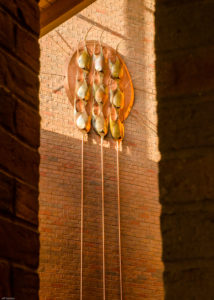 The 30 foot bronze sculpture on the front Sanctuary wall was designed and fabricated by Edgar Boevé.  Its design was inspired by two Biblical themes:  the sun of righteousness, which illumines, quickens and comforts, and wheat, a symbol of life out of death.  Additionally, the sculpture subtly restates the Trinity:  the large circle (orb) is the traditional Christian symbol of God the Father, the rays from the orb form the shape of the cross (the son, Jesus Christ), and the kernels of wheat resemble descending doves, a traditional symbol of the Holy Spirit.  The Resurrection sculpture was commissioned and dedicated in memory of Mrs. Thelma Malestein, wife of North Hills’ second pastor, Rev. John Malestein.