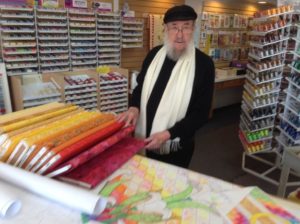 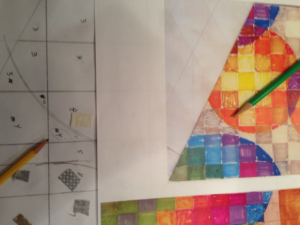 For the Trinity Season the Sanctuary is filled with all shades of green—the verdant color of growth and life.  On the lectern side of the pulpit, where the Bible is read, an orb (“sun”) echoes the orb found in the bronze Resurrection (Edgar Boevé, 1978) wheat sculpture that hangs on the chancel wall.  Throughout Christendom, the orb has been used as a symbol of God the Father.  On the pulpit side, the same orb “flowers” into a cross as the word of God is preached.  The communion table cover displays 49 (a symbolic 7×7) wheat stalks that form an orb around a cluster of ripened grapes.  The North Hills paraments were designed by Chris Stoffel Overvoorde, Professor of Art emeritus, of Calvin College.  On the center of the Communion Table lies another orb, an orb piled with grapes.  From the grapes burst 49 (a symbolic 7 times 7) wheat stems. 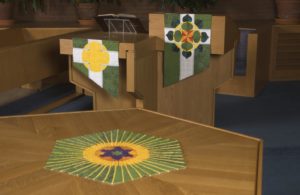 Advent is a period of preparation for the celebration of the birth of Jesus, the King descended from the royal line of David.  Thus the church observes the season by using the royal colors of purple, blue and gold.  Trumpets on the lectern and pulpit banners remind us that Christ is king, and that when He comes again the trumpet shall sound and all the ends of the earth will see the salvation of our God (Isaiah 52:10).  Thus the trumpets on the pulpit (where God’s Word is proclaimed) face all four directions, symbolizing the gospel that has gone out into all the earth, its words to the ends of the world (Romans 10:18).  The sole trumpet on the lectern faces east, the direction from which, says scripture, Christ shall come again (Matthew 24:27). 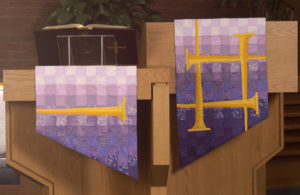 White and gold are the festival colors of the church year, their use reserved only for the celebrations of Christmas and Easter.  The side wall banners show the symbols Alpha [A] and Omega [Ω]; these first and last letters of the Greek alphabet recall Christ’s words I am the first and the last, the Alpha and Omega, the bright morning star.  The simple pulpit paraments, bursting with golden rays, lead the eye to the place where God’s word is read and preached.  The Christ candle is prominently displayed on the Communion Table.  The banners were designed by Chris Stoffel Overvoorde and appliquéd by Mrs. Ellie van Harn.  The communion table star covering was created by Jean Engle, Pastor Engle’s mother, and gifted to North Hills Church in 2010.

The four-pointed star of Bethlehem bursts forth over a rainbow of color.  The colors of the spectrum reflect the covenant of God that promised his salvation to all people.  Notice how the Advent colors of purple and blue are still reminiscent, but now overshadowed by the light.  These waves of color radiate from the light of the star which shines in the darkness, just as Christ’s light came to be a light unto the Gentiles and the glory of the people of Israel.  The chevron-shapes of color give an unusual energy and glory to the space.  Our banners were designed and fabricated by Chris Stoffel Overvoorde. 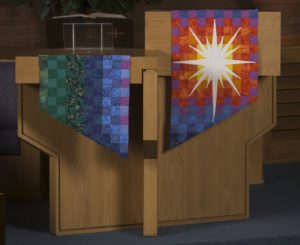 For the season of Lent the sanctuary is awash in the penitential color of purple.  The pulpit banner shows a rugged cross, outlined by a crown of thorns.  All hope is not gone however as the cross glows with irrepressible light—light that will break forth fully on Easter morning.  The banners were designed by Chris Stoffel Overvoorde, Calvin College Professor of Art Emeritus, and fabricated by Mrs. Ellie Van Harn. 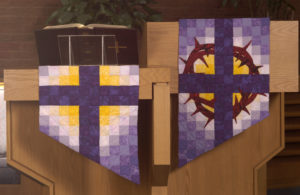 And By His Stripes We Are Healed is the Lenten theme shown on the simple crimson and purple striped paraments and side banners.  The central banner shows a rugged cross, outlined again by the penitential colors of purple and crimson.  The crown of thorns on the cross reminds us of Christ’s suffering.  All hope is not gone, however, as the cross glows with irrepressible light—light that will break forth fully on Easter morning.  The banners were designed by Chris Stoffel Overvoorde, and fabricated by Jean Engle, Pastor Engle’s mother. 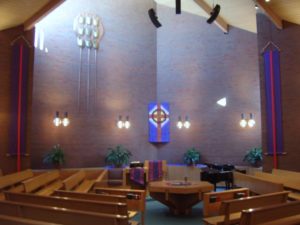 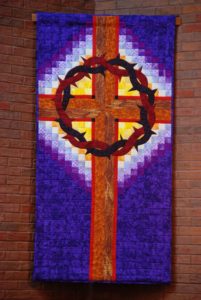 The Communion Table cover shows twelve Easter lilies set against the bursting sunrise of Easter morning.  Likewise, on the pulpit paraments, Easter lilies are set against the orb—a symbol of the rising sun and of the open tomb, both reminders of Easter life.  A large-scaled Christ candle on the front ledge announces the living Christ, the light and life of the world.  Our Eastertide banner set, completed in 2015, is entitled Joy in the Morning and was designed by Chris Stoffel Overvoorde, and fabricated and hand-appliqued by Jean Engle, Pastor Engle’s mother. 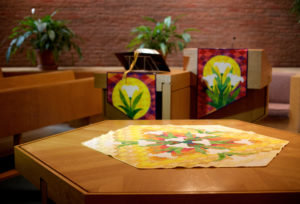 On Ascension Sunday the church celebrates that Christ ascended on the clouds into heaven (Acts 1).  To mark the event the Sanctuary’s front wall is graced with a very large (4’ x 11’) skyscape by Chris Stoffel Overvoorde entitled Clouds Over Michigan, functioning as a sort of window that opens to us a view of God’s magnificent creation.  In his artist statement, Overvoorde explains his preoccupation with skyscapes:  “I paint clouds because they cause people to look upward.”  Further, the predominate colors of blue and green are symbolic covenant colors:  blue is the color of the water of baptism, and green is the color of growth and new life.  The pulpit paraments are meant only to be accents highlighting the clouds of the painting; the mottled blue background and green crosses were designed by Paul Andriese and fabricated by Jean Engle, Pastor Engle’s mother. 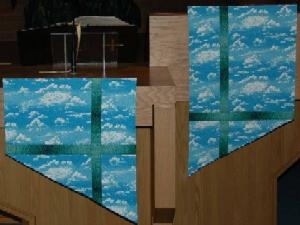 Fiery reds and flaming oranges and yellows are the colors of Pentecost for they recall the Holy Spirit’s “tongues of fire” that settled upon the newly-commissioned church of Jesus Christ.  The banners use these colors and superimpose upon them another symbol of the Spirit, the dove.  On the pulpit, six doves form an incomplete circle (orb) over the cross; on the lectern the symbolic seventh dove (there are seven gifts of the Spirit) is flying to the orb to complete the circle—a reminder that God’s kingdom is here, but not yet fully complete.  Fiery red side banners, communion table and baptismal cap add to the Pentecost setting.  Our banners were designed by Chris Stoffel Overvoorde, Calvin College Professor of Art emeritus; the 16 sconce banners were completed by Jean Engle in 2017. 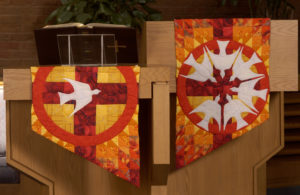 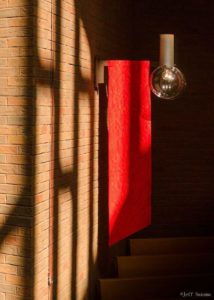 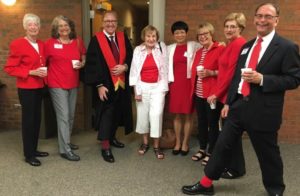 For summer worship our Sanctuary is filled with all shades of green—the color of growth and life.  Organic leaf forms found on the lectern and pulpit paraments lead all attention to the open Bible.  The paraments were designed by Chris Stoffel Overvoorde and appliquéd by Mrs. Jean Engle, Pastor Engle’s mother. 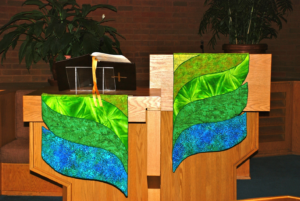 The pulpit banners use wavy, various hues of blues and greens to symbolize the waters of baptism.  Superimposed are three symbols of each person of the Trinity, respectively:  the orb (sun, The Father), the dove (the Spirit) and the cross (Jesus, the Son).  The baptismal cap on the font uses all the colors of the rainbow to recall God’s covenant promise made in Genesis to be our God forever.  The baptismal banners were designed by Chris Stoffel Overvoorde, Professor of Art Emeritus of Calvin College, and fabricated by Mrs. Ellie van Harn. 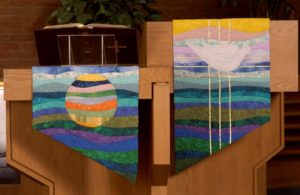 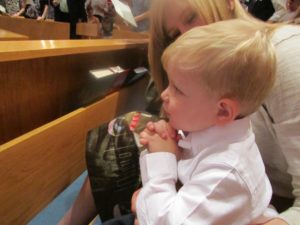 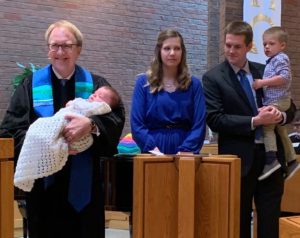 The wedding paraments on the lectern and pulpit were designed by Chris Stoffel Overvoorde.  The lectern banner (left) shows two converging disks.  The pulpit banner (right) shows the disks in front of the cross, now entwined as two rings—a traditional symbol of marriage.  The banners were completed in 2014. 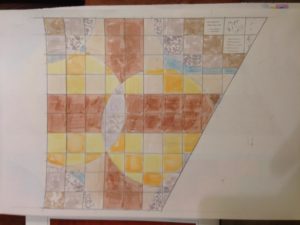 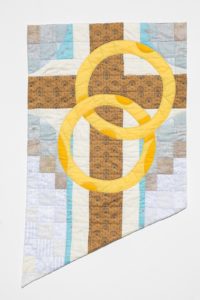 The 30 foot bronze sculpture on the front wall was designed and fabricated by Edgar Boevé.  Its design was inspired by two Biblical themes:  the sun of righteousness, which illumines, quickens and comforts, and wheat, a symbol of life out of death.  Additionally, the sculpture subtly restates the Trinity:  the large circle (orb) is the traditional Christian symbol of God the Father, the rays from the orb form the shape of the cross (the son, Jesus Christ), and the kernels of wheat resemble descending doves, a traditional symbol of the Holy Spirit.  The Resurrection sculpture was commissioned in memory of Mrs. Thelma Malestein, wife of North Hills’ second pastor, Rev. John Malestein.